Brussels, Belgium: Over the last eight years, while climate impacts accelerate, country governments have channelled more than US$ 73 billion of public money into coal projects. The finance, which amounts to US$9 billion a year, is causing as much pollution as the nation of Italy, reveals “Under the Rug: How Governments and International Institutions Are Hiding Billions in Support to the Coal Industry”, a new report [1] launched today by WWF, Natural Resources Defense Council and Oil Change International.


On the 3rd and 4th of June, the 34 countries of the Organisation for Economic Co-operation and Development (OECD) – with the European Union countries making up almost two-thirds of OECD membership - will have their annual Ministerial meeting. On the 7th and 8th of June, G7 Heads of States and governments will meet in Germany. Leaders must seize these key political opportunities to ensure their climate credibility by ending support for coal abroad.

“Many developed country governments that push for ambitious climate action are simultaneously funding coal abroad. They cannot do both and be credible”, said WWF’s Global Climate and Energy initiative leader Samantha Smith. “It is time for rich nations to put their money behind the solutions, like renewable energy, rather than using taxpayers’ money to fuel climate change.”

International public finance for coal between 2007 and 2014, the report reveals, is responsible for as much pollution as Italy - the country with the 20th highest amount of emissions globally- , causing total greenhouse gas emissions amounting to almost half a billion tons of carbon dioxide equivalent per year.

In that period, Japan provided the largest amount of coal financing of any country, with over US$20 billion of finance. In the OECD club - whose official Export Credit Agencies provide nearly half of the total international finance for coal - Korea and Germany were the next largest sources of funding for coal.

The EU – led by the European Commission, speaking on behalf of EU countries in OECD talks –failed to agree an official position ahead of the OECD meeting on coal export finance taking place next week. EU Member States are still divided, some willing to end support for coal plants, others being more reluctant. So far the EU has largely been inaudible in the OECD negotiations.

“COP Paris is around the corner.  It is time for European countries, the Commission and the EU as a whole to end procrastination and show leadership”, added Sébastien Godinot, Economist at WWF European Policy Office.  “Climate commitments and engagement to phase out fossil fuel subsidies should immediately lead the EU to ask the OECD to end export credits for coal.”

Notes to the editors:
Combining all known public sources, and augmenting them with subscription industry databases, this report makes comprehensive information on public financing for coal easily accessible for the first time. 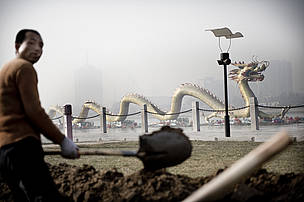 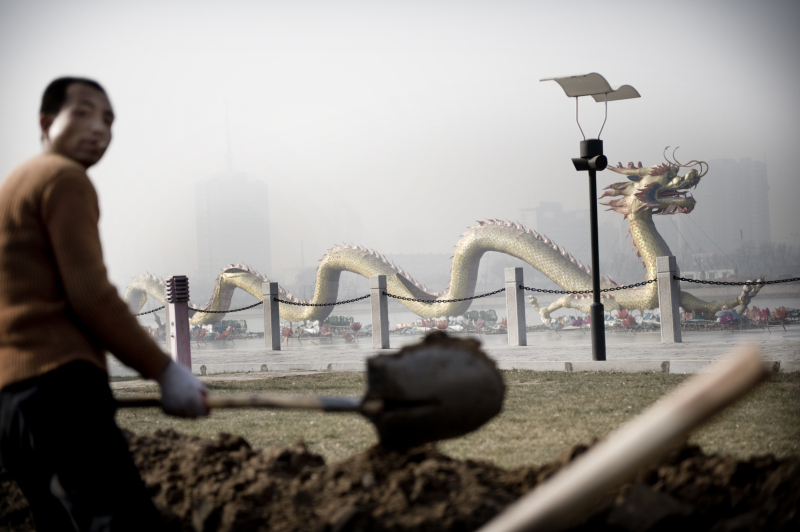 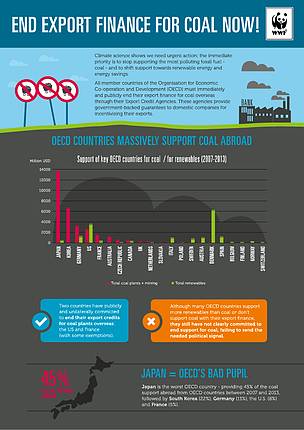 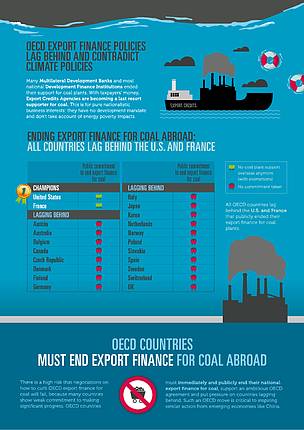