The Baltic is the first EU sea basin to establish regional structures (namely the Baltic Marine Environment Protection Commission - HELCOM, and the Vision and Strategies Around the Baltic - VASAB) that support the implementation of the EU MSP Directive at Member State level and to establish an action plan for achieving good environmental status of the sea by 2030 at the latest, as required by EU law. Overall, however, MSP in the Baltic region has only been partly successful: WWF’s assessment reveals that the integration of an ecosystem-based approach - which maintains ecosystems in a healthy, productive and resilient condition against human pressures - is uneven across Member States.

“An ecosystem-based approach to maritime spatial planning can truly transform how sea spaces are assessed and managed,” says Valerie de Liedekerke, WWF Baltic Ecoregion Programme Interim Director and Programme Manager. “It is necessary in order to secure a sustainable blue economy, to define the carrying capacity of our sea areas, and to conduct robust environmental assessments using up to date data in order to reduce current environmental degradation. Our report shows there is a long way to go before ecosystem-based approaches are fully integrated into the region’s marine management.”

When put together, the areas Member States have designated for marine protection do not abide by the EU Biodiversity Strategy target of protecting at least 30% of marine and coastal areas, of which 10% should be strictly protected (meaning human access and impacts are strictly controlled and limited). Furthermore, not one Member State plan sets aside space for nature restoration activities in the Baltic and only two countries have partially addressed temporal and spatial uncertainties in the era of climate change.

“While the Baltic Member States have taken the regional lead in Europe for submitting plans to sustainably manage their sea, significant gaps in these plans show how crucial it is for all Member States to work across sectors and align with EU policies, such as the Common Fisheries Policy and Marine Strategy Framework Directive that seek a sustainable and secure future for all,” says Dr. Antonia Leroy, Head of Ocean Policy at WWF European Policy Office. “A sustainable blue economy in the EU depends on harmony across borders, space for nature and legally-binding maritime spatial plans.”

WWF’s assessment lands just ahead of the European Commission’s 31 March deadline to assess the EU Member States’ implementation of the MSP Directive and their national plans. The plans detail their respective strategies for sustainably managing marine areas and resources.

WWF is calling for the Baltic and all EU Member States to ensure their maritime spatial plans secure sufficient space for nature to recover and thrive. This includes leaving offshore renewable energy development out of Marine Protected Areas and establishing transboundary cooperation between Member States to reduce harmful impacts to nature from this type of infrastructure. Finally, stakeholders must be involved and consulted in all phases of MSP, with national plans covering all sea areas and continuously adapted as new data becomes available and new pieces of legislation come into force.


About the assessment
A total of nine maritime spatial plans belonging to eight EU Baltic Sea countries— Denmark, Estonia, Germany, Latvia, Lithuania, Poland, Sweden and Finland —and the autonomous region of Åland, were reviewed to determine the degree to which they are ecosystem-based.

A core element of WWF’s work has been translating the EU’s MSP Directive’s requirements into a set of 33 measurable indicators across four categories, upon which the assessment was based. A national maritime spatial plan is considered to be successfully delivering an ecosystem-based approach to MSP once all indicators are achieved (i.e., scoring 100%).

Key results:
At the Member State level, the analysis reveals that Latvia’s performance was strongest in the Baltic. This is because Latvia embraced an ecosystem-based approach to MSP, making full use of existing scientific knowledge, conducting robust environmental assessments and including procedures for monitoring the implementation of environmental, social and economic goals in its final national plan. It has also successfully translated EU renewable energy targets for carbon neutrality into spatial designations that respect biodiversity recovery and resilience.

At the opposite end of the spectrum, Denmark’s planning failed to designate any space for essential blue corridors or areas for nature restoration and blue carbon ecosystem protection. Since the beginning of the MSP process, the nation has neither prioritized nor invested in adopting an ecosystem-based approach, despite data being available to facilitate these processes. Denmark was also the only Member State that failed to address conflict risks in its national plan.

A key Baltic MSP success has been in how data is collected, reported and made available through a shared database via the regional sea convention HELCOM. The convention's data hub is a valuable source of MSP knowledge as, in addition to storing spatial data, the environmental status of different sea areas is available and regularly updated by technical experts. This data is essential for Member States to adapt their resource management strategies over time, and thus improve future national maritime plans. The Baltic’s cooperative approach serves as a positive example to other regional seas for how to successfully support an ecosystem-based approach to MSP. 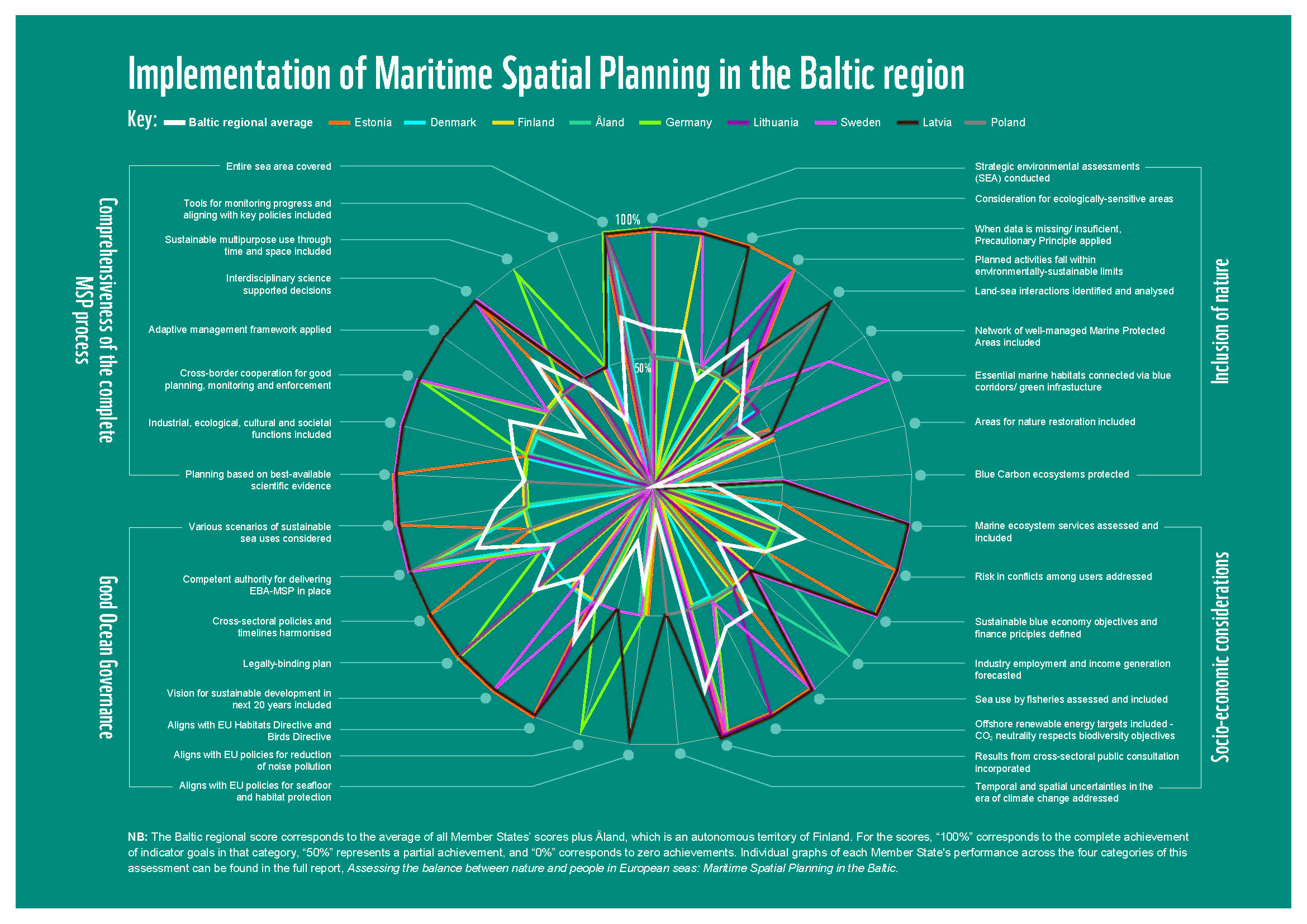 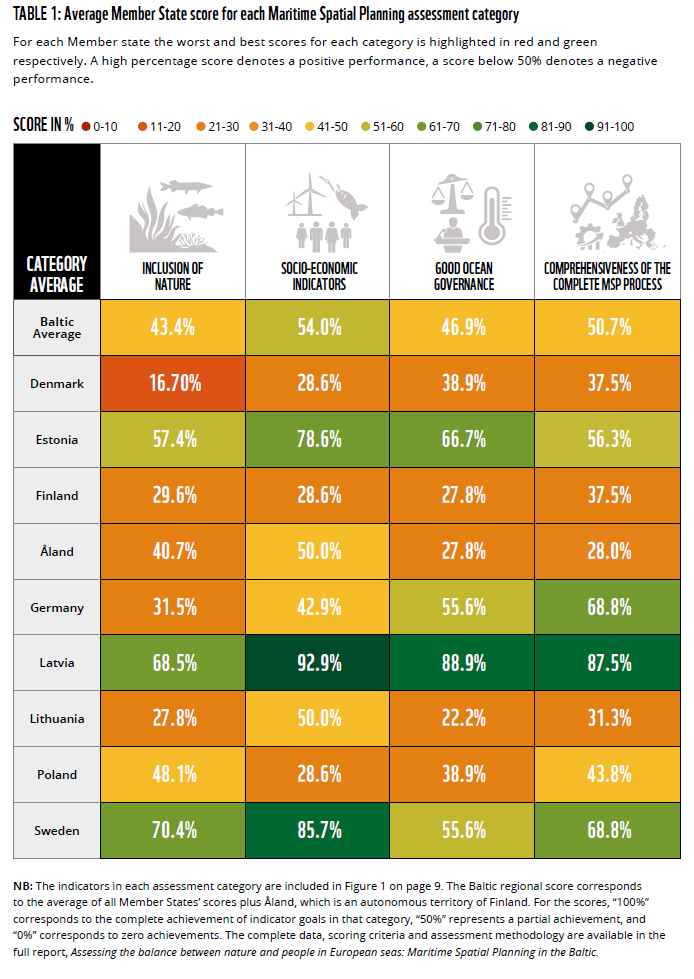 The Baltic is a vulnerable sea
The Baltic is the youngest sea on our planet and one of Earth’s largest bodies of brackish water (water that is saltier than freshwater, but not as salty as seawater). Saltwater from the North-East Atlantic blends with fresh water from the rivers and streams that run through 14 different countries into the sea basin, resulting in a delicate mixture that yields a highly sensitive and interdependent marine ecosystem with unique flora and fauna.These special qualities make the Baltic Sea especially vulnerable to environmental pressures.

The physical damage and disruption caused by maritime sector activities threaten the health of marine habitats and wildlife, including populations of species that Baltic fisheries depend on. The cost to citizen well-being from the deterioration of the Baltic marine environment was already estimated to have surpassed €9 billion in 2015, making the annual cost of marine degradation nearly double the value of the region’s blue economic growth. In short, the dire state of play of marine ecosystems makes it imperative to succeed in implementing and assessing ecosystem-based MSP in the region.


The Baltic Blue Economy
Between 2009 and 2018, the Baltic blue economy grew by over €5 billion, becoming the third fastest growing regional blue economy in the EU. The increasing needs for space at sea and underwater, as well as for resources, adds pressure to the Baltic’s fragile ecosystems, compromising the very resources on which this economy depends.